Download e-book On The Brink 3: TechnoThriller Action Adventure. Boots on the Ground (War With Iran) 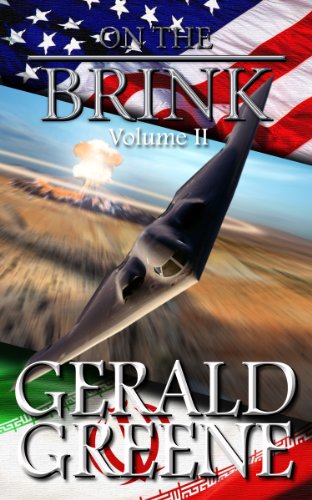 Your comment, however, emphasizes a virtue I did not sufficiently acknowledge at the time. And at the time it was a rare and impressive achievement in SF, deserving of praise. But I don't think I'd agree that things haven't changed since; nowadays careful weaving of background isn't rare. It may be reasonable to say, however, that Dune has been foundational in teaching later authors the necessity of doing this. Ultimately, I just couldn't handle how bad the writing was.

All the characters are utterly cardboard flat. Cliched tags follow them around the book. One character has an inkvine scar on his jaw that eventually ripples in any scene he's in I felt like instituting a drinking game based on the rippling of the scar. And the author just can't handle the flow of information who knows what how, and whether the reader also knows that and how. This leads to the I'm-going-to-spell-out-precisely-what-I'm-about-to-do syndrome you mention, but goes deeper than that, creating plot holes and distortions, and causing most of the characters to learn most of the important knowledge they need basically by staring into space and having a revelation.

Try again in a year or so. Dune is one of those books that takes a few tries. I think it was my 3rd attempt before I really got hooked and made it through and savored every page from there on out. It's kinda like Lord of the Rings in that respect. If you're in the right frame of mind, it's awesome.

If not, it's the most boring piece of dullness you've ever seen in print. But once you're in, you're in for good. Admittedly, the book is more a triumph of imagination than of craft. I won't argue there. That said, I agree with the comment that it takes a few reads to really appreciate. The writing has its flaws, but it has its real charms. And those charms can be lost on a first read-through. Many of them were on me when I first plowed through the book.

It is not a book to be plowed through, I would later learn. I actually recommend the miniseries. It gets panned by a lot of people, but you need to understand it less as a television miniseries and more as a filming of a dramatic theater play. It heavily uses theatrical conventions, lighting, monologuing, pacing, even very theatrical special effects at some points.

FilterJoe on Sept 9, I loved the miniseries after hating the first film - a travesty.

After watching the miniseries, thousands of people chanting "Muad'Dib" came into my dreams and I still remember it today, years later as luck would have it, my son attends a Jewish school whose day begins with a "Modani" ceremony - guess what that makes me thing of.

The theatrical tricks of this miniseries obviously worked very well on me. Agreed, the miniseries was pretty good as long as you keep in mind it's more theatre than film. I feel Vernor Vinge has a good talent at this too. Apropos A Fire Upon The Deep superb read exposition is sparse and when required neatly woven into the story so that you almost never realize it's happening when it is. CoreDumpling on Sept 9, Deepness had a lot of themes that satisfy hacker tastes not just in terms of the technology but also the socio-political ramifications of it.

I'm so glad you mention it! I'm in the process of reading it right now.


Somewhere around pages in; it's a bit heftier than Fire, but so far, well worth the read. I'm thoroughly impressed. The first time I read Deepness in the Sky, I felt like the middle was dragging on, because I wanted to get to the end. Subsequent re-readings have revealed the middle is packed full of content and very good, no filler at all, it can just be a bit much to take in on one shot. Loved Deepness in the Sky. I haven't read Dune, so maybe there's something here I don't recognize, but I would have said modern space opera traces very directly back to good old and very much pre-Dune space opera There's a kind of semi-comedic irony that can be read into his character.


InclinedPlane on Sept 9, The Wheel of Time series borrows extremely heavily from Dune. I found both syfy miniseries more than acceptable, no? Our American culture has changed so much that modern readers think "what's the big deal with this".

I remember watching Deer Hunter Obviously, to people still in touch with Vietnam in 78 , the impact was Deer Hunter is an incredibly good movie and I have no connection to Vietnam. I was born in The Deer Hunter is a very strong movie that still stands on its study of how relationships change under stress of war. It's not really about Vietnam specifically, or its time. Perhaps you were too young when you saw it? Born in 79 FWIW.

God Emperor is difficult to get into, but worth sticking with. Actually love the opening sequence of that book more than any other, which describes some thieves being chased through a forest by a pack of guard wolves, as Herbert moves expertly from the thoughts of one thief to another as they are gradually caught by the wolves, starting from the slowest runner at the back. Fantastic writing. Radim on Sept 9, Indeed, God Emperor is by far the best of the Dune series.

I've re-read it many times and it never fails to deliver.

Goes to show different people like different things? Apparently, I'm more into the psychology and exploration of large-scale social patterns. People who like the other Dune books are presumably more into "action" sci-fi.

Nothing wrong with that. I read Stranger in a Strange land for a literature course in college, and what really helped my understand the book was when the prof explained some of the political and cultural climate that influenced the book. Hyperion is Chaucer, updated. Took me embarassingly long to twig onto that. Personally, I found the first and fourth Hyperion books to be my favorites, and the middle two less so, and nearly a separate story altogether.

And let's not forget the 16th century "Cent Nouvelles nouvelles", which is obviously related by format and plot. TL;DR: These are timeless tales, retold to fit the author's time. Probably the most surprising thing about this list is that whoever made it didn't insert Amazon affiliate links into it. Anyway, these lists always raise the question of what does "good" mean exactly? Inevitably they're dominated by books that were, in their time, incredibly significant. You see the same things in computing books. The ideas were important.